Can a Diabetic Emergency Get You Out of a DUI? 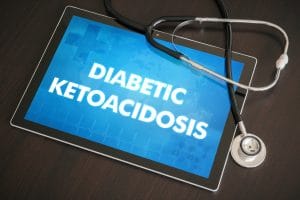 Diabetes may be a possible defense in driving under the influence or driving while impaired cases. There is some thought that if you fail a field sobriety test or a breathalyzer test, you may be able to assert that the test failure was due to diabetes and not the amount of alcohol you have in your system.

According to Florida Forensic Science, the key is in the details. Diabetic ketoacidosis (DKA) is a form of diabetes “where the ketones could potentially affect the breathalyzer.” Hypoglycemia is a condition “where the symptoms that mimic intoxication are much more likely to be present.”

A high or low blood sugar reading does not automatically mean you have a strong defense. Generally, a medical expert must review the evidence to determine if a diabetic emergency contributed to a false DUI test result.

We’re going to explain how all this works, but it’s about to get real science-y in this blog.

As Florida Forensic Science explains, humans need energy. Energy in our bodies comes from metabolized sugar. The metabolization of sugar, in turn, requires insulin. Diabetics is defined as follows, in simple terms:

Generally, a normal blood sugar level is between 70-140 mg/dL.

When does diabetic ketoacidosis occur?

DKA happens when a person’s blood sugar level increase to more than 300 mg/dL, so your body starts producing ketones. These ketones break down fat to process energy instead of using insulin. High levels of ketones in your body are toxic. Some of the symptoms of DKA include confusion, a dulling of the senses, and a lower consciousness level.

When does hypoglycemia occur?

How does any of this apply to DUI charges?

We’re getting to that.

When a person with diabetes goes into ketoacidosis, one of the side effects is acetone production. Acetone, for the record, is the stuff that takes off nail polish. Anyway, acetone smells an awful lot like alcohol – and it tests like it, too. So a person with acetone breath may end up with a breath test reading that shows a .02% higher reading.

Combine a false breath test reading with symptoms like confusion and reduced consciousness, and you end up with someone who looks drunk, but isn’t.

Can I just say I have low blood sugar to get out of a DUI?

I mean, probably not? If you use that excuse when you don’t have low blood sugar, the cops are going to want a blood test. And unlike a breath test, which can read false, the blood test won’t. It’ll show you’re just drunk.

Can I get out of a DUI if I have a seizure?

Is this really the route you want to go? I’m pretty sure the seizure is more pressing.

Again, probably not. Here’s the thing: if you cause a car crash because you have a medical emergency, you can usually get out of a ticket, provided you took all possible steps to avoid such an emergency. Like, if you have heart issues and you take meds and you have a heart attack on the road, that’s not really your fault, is it? But if you don’t take meds and you know you’re prone to heart issues or blackouts or seizures, you can get a ticket AND be on the hook in civil court.

So, the diabetes thing works the same way. You know alcohol is basically sugar, so you know it’s going to affect you more when you drink it. If you drink so much it triggers a medical emergency like a seizure, you’re probably still on the hook for a DUI.

Unless, of course, you’ve got a lawyer on your side who not only knows about how blood sugar and diabetes can throw a breath test out of whack, but also how to defend you against a DUI charge.

At Drew Cochran, Attorney at Law, we assert every defense possible including seeking to suppress breath and blood test results because the tests were improperly conducted or the results are not reliable. We also may argue that there is a legitimate reason for a high reading such as an emergency diabetes condition. To discuss all your defenses with a DUI defense lawyer, call us in Annapolis or Ellicott City today. You can schedule an appointment by calling 410-271-1892 or by filling out our contact form.

The post Can a Diabetic Emergency Get You Out of a DUI? appeared first on Drew Cochran, Attorney at Law | Ellicott City and Annapolis, Maryland.